West Tennessee. A beautiful red truck, fully engulfed. The fire was so hot, Hoss said he could feel the heat against the glass as he drove by.

We see the remains of numerous car fires as we drive. The asphalt is scorched, the paint gone, bits of burned car guts strewn here and there. It's like passing the scene of a crime. "Something beloved died here". I just hope they're insured.
No comments:

That's the Hoss pile on the left. Mine's on the right.

Yes, we take all of these every morning - in fact, Hoss takes an additional five at night.

I used to think old people bought those pill organizers because they couldn't keep track of what pills to take when - or worse, couldn't remember if they'd taken them at all.

But no, I now realize the truth.

We open bottles at least 126 times per week. The organizer owners open theirs once a week.

Well, this is a first. I wish I'd had the time to go exploring and find the darned thing.

Where Have You Been??

Whenever I leave the truck, this is what I see when I come back. And usually she insists on "kisses" before she'll move and let me in (but I think that's just to make sure I didn't have anything good to eat while I was gone).

It feels good to see that sweet face peering out at me, awaiting my return.

I love these gecko thingers. We used to catch salamanders as a kid, but these are much bigger and pretty darned fast. I'll bet they attract all sorts of kids and cats. Erm ... I wonder if they're poisonous ...

This one was on a brick column outside of a Denny's:

As we sat at a shipper's waiting for our turn, this patch of landscaping caught my eye. So many plants in there for which I've had to spend good money to have in my home - and here they are as landscaping. Love the irony!

After nearly five years of driving, I still can't get enough of the travel.
No comments:

Due to an oversight, really fat girls must ride side saddle. 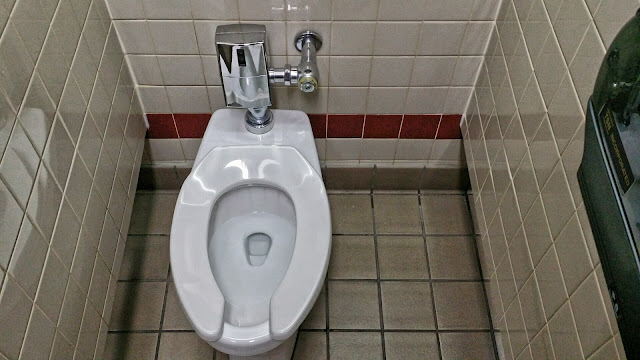 Forgot to add this pic ... you can imagine what the floor looked like. :) 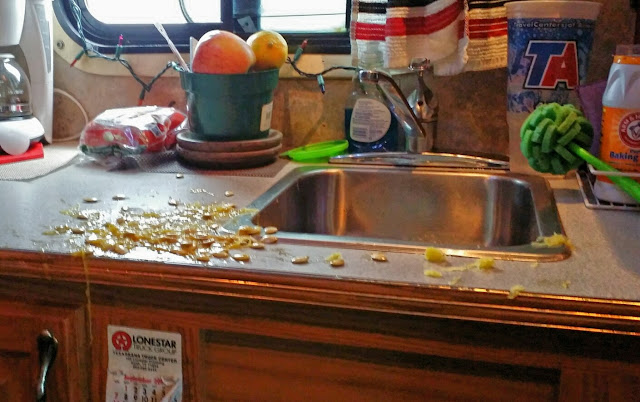 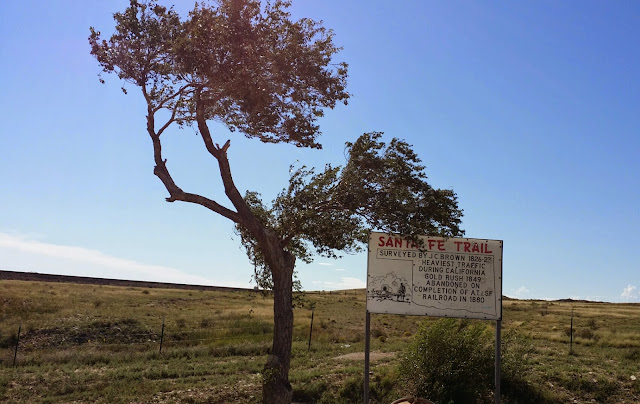 They say the wagon wheel ruts can still be seen in the prairie, 175 years later. It's tough to imagine how enormously difficult that trek must have been back then.

I wonder if they were able to put aside their struggles long enough to take in the beautiful scenery around them?

Yesterday, I gathered everything to make Spaghetti Squash and Cauliflower Carbonera. There are several steps to making it, but it's deliciously worth it and I've found a few shortcuts.

One shortcut is the preparation of the squash. Rather than cut in half, scoop out the innards, peel, chop, steam, the recipe instructs:


Scrub the squash, then stab deeply with a large knife several times to allow steam to escape. Microwave on high, turning frequently, until the squash surface gives to a firm squeeze, about twelve minutes. Remove from the oven and set aside to cool enough to handle.

Pay attention to the large knife reference. It's important.

I stabbed it with a long but smaller bladed knife, one I use mainly for slicing tomatoes. Although I made sure the blade went all the way through the flesh and into the hollow core, the knife left a smaller hole. I made no less than 7 or 8 cuts, all around the gourd.

I turned the squash one last time in the microwave and gave it two more minutes of nuking. The machine finished the cycle and beeped. With the microwave noise gone, we heard something odd, like a buzzing/clicking. We looked at each other across the table. What could that be?

Suddenly, BAM!! The microwave door blew open and spewed hot, gooey squash all over the kitchen countertop, walls, and floor, and very nearly, us, too. The cat, who had been sleeping on the dinette cushion next to me, shot out of the sleeper and into the cab like she had a rocket up her ass. Hoss and I looked at each other in total disbelief for a second, then burst into laughter.

Oddly enough, the squash blew 98% of the seeds and slimy guts out the door while the edible, meaty portion of the squash remained on the microwave plate.

It made some fine Carbonera, but next time I'm using a much larger knife.
3 comments:

I'm not a fan of whimsy in and of itself. I'd rather stab myself with a fork than spend a day at Disney World. Fairies and butterflies and dreamcatchers and quilted scenes of puppies hold no interest for me. If someone gave me a souvenir plate from the Grand Canyon, I'd probably serve them brownies on it. You get the idea.

So when I came across this display of fanciful ceramic frogs at the Iowa 80 Truckstop, I was surprised at how they captivated me. There were so many sizes and styles and colors, and their poses and expressions were so delightful that I had to snap a few pics.

That last one is my animal spirit.

I made this list weeks ago of broker offices and their load counts. I came across this page recently and it occurred to me how much my handwriting has changed over the years. I had the typical rounded, loopy, closely spaced writing of a teenaged girl in the 70s. It looks quite different now:


This got me thinking. We're all taught how to write using whatever cursive standard is popular at the time, yet we each grow up to exhibit writing that's unique to each of us. Some changes come about due to environmental changes - think of the notes scribbled in a crazy, fast-paced emergency room - while others are intentional. For instance, when I first started programming, in the 80s, we were required to use a crossed seven, a slashed zero, and an underlined s to avoid confusion with other letters and numbers. That crossed seven stays with me today, and honestly, I wish it were more common here in America. I frequently have to ask Hoss if he's written a 7 or a 1.

Reading up on the subject brought forth web pages about graphology, the "science" (ahem) of interpreting personal traits via handwriting.

Ok, I'll play. So what does my adult handwriting mean?

Slant - Since my writing tends to not slant left or right and remains mostly upright, I tend to be logical, practical, independent, and guarded with my emotions.

Size - I was told as a teen that my writing was large when compared to others'. Other than signatures, we rarely see handwriting any more so I can't say for certain. It certainly isn't what I'd describe as small. Average sized writing would mean I'm well-adjusted and adaptable, and we know that's not the case. I'll have to go with the previous diagnosis, which means that I'm outgoing with a big personality.

Upper loops - This one's tough, as my letters tend to change depending on the letter that comes before or after them. Sometimes, for example, my lower case L is a single downstroke that curves a bit to the right at the end. But overall, I think I use open Ls and open Es, meaning I am spontaneous, relaxed, open minded, and expressive. Well. Go me.

S - I never make that forwarding loopy lowercase S, because mine always come out looking pathetically stupid. So my cursive S looks like a printed S, meaning that I'm allegedly versatile by comfortably mixing writing styles. I prefer to describe that behavior as rebellious.

Pressure - I don't see indications of heavy, light, or uneven pressure. As a kid, though, I used to bear down very heavily, leaving ghost writing on the following two or three pages of a tablet. I had few secrets.

Lower loops - Some are straight, like the p in Shreveport (impatience); some are cup-shaped and open, like the y in Kansas City and the g in Springfield (non-confrontational); some are full loops with varying pressure like the f in Springfield (energetic, driven, sensuous, and/or insecure). The presence of many varied shapes (bingo!) may indicate that I'm unsettled and emotionally unfocused, which would need to be confirmed by further analysis of other letter structures. I think I'm just lazy and make the fewest strokes necessary.

There are many more indicators that I just don't have the patience to investigate. It is a fun way to spend an hour or two, though.

And in the end, I think my handwriting means I'm just a hot mess with pen and paper.

Taken shortly after sunrise an hour Northeast of Denver. Not three miles later, I was driving into snow. I know the higher altitudes get earlier snow, but jeez, early September??

I once lit a candle in a church for someone I lost long ago. I don't believe; I'm not even marginally agnostic. I am, in fact, soundly bereft of faith. But I was in a special place, and I knew how moved my beloved would have been, standing there in his modest suit, his fedora in hand, an expression of pain and respect and grace on his lined face. I took a candle and placed a dollar on the plate, and I lit the candle with fat, copious tears in my eyes, on his behalf, for the thousands that died mere yards away.

So does my love for him.
2 comments:

Caught this at a Walmart in Michigan. It's a closet. A janitor's closet, about 5 feet square. To the left is a Subway, behind it is the Subway soda fountain and seating, and to the right is a large inset where they keep the ice machine. I suspect the occupancy notice is for the Subway, but I saw this and got a vision of the classic janitor's closet tryst - with 52 paramours.
1 comment: