A New Kind of Rub

Recently, I bought a tin of Lapsang Souchong for my husband to try. That my smokey flavor fan spouse loved it wasn't so astonishing. The depth and richness of the smokey flavor did surprise me, though. And of course the first place our conversation went when sipping that first cup was "this would make a fantastic food flavoring!"

At the time, I was thinking of making marinades or a flavorful sauce based on a very strongly brewed batch of tea. But then it occurred to me - why not make a dry rub? Tea leaves are edible, after all. It makes sense to use the most concentrated source of that wonderful smokey flavor.

So when a couple of woefully naked chicken breasts peered back at me from the cutting board last night, I went back to that tea rub idea.

Grind together in a coffee or spice grinder to a fine powder. Rub liberally on chicken breasts 15 to 20 minutes before grilling. Store any remaining rub in an airtight container for up to three months.


The result was delightful. The chicken remained juicy and tender inside, while that deeply smokey, flavorful outside accompanied a fresh herb and potato salad beautifully.

This tea is going to take the place of liquid smoke in many of my favorite recipes.

If you want to try it but can't locate it near you, it can be ordered online. Use the Google machine. Then let me know what you think!
1 comment:

A couple of months ago, we stopped at a gas station in Freer, Texas for iced tea. Like all quick stops in rural Texas, this one included a taquería where tacos are made to order. But they also offered tamales. Fresh, homemade tamales. Six beef or pork tamales for four bucks. Of course we bought some.

Back at the truck, we opened the foil packet. They were warm, fragrant, delicious tubes of tender and tasty protein surrounded by steamed corn husk lined with corn flour dough and seasoned to utter perfection. After the second one, I climbed down from the truck cab and went inside to buy four more packages.

So when we found ourselves in Freer yesterday, we knew where we would buy our lunch.

Even though they're fabulous gobbled up warm and fresh and unadorned right there in the midst of  dusty, faceless humanity, I wanted to dress them up a little for our second dance with these fingers of perfection.

Canned sauce would not be sufficient. I had to research and cook up a homemade red sauce. I've always wanted to use the large, red, dried peppers found in bulk in every grocery on the border. But should we just jump into an all-pepper sauce most often found in Central Mexico? Or could I create a hybrid?

I decided on the latter. And nailed it:

The sauce is far thicker than the usual enchilada style sauce, full of rich pepper flavor, but with the addition of spices that somehow enhance the mild flavors and delicate texture of the tamale. This sauce, however, would work not only for tamales, but enchiladas, burritos, quesadillas, chili rellenos, and so many more dishes from South of the border. The flavor is far superior to the canned stuff - and it's easy to make:

Bend the larger end of the dried chilis to pop off the stems and place in a heatproof container that will allow the boiling water to cover them. Soak the peppers in the hot water 20 to 30 minutes, or until softened. Drain. Tear the peppers into one inch sections. Add to the bowl of a food processor with the tomato puree and 1 cup of water; process until smooth. Scrape into a microwave safe bowl, add remaining ingredients, and microwave on medium 10 minutes, stirring every 2. Makes about one pint of sauce.
1 comment:

After 80 minutes lost to rush hour through Austin, we found ourselves at supper time at the doorstep of Buc-ee's in New Braunfels, just north of San Antonio: 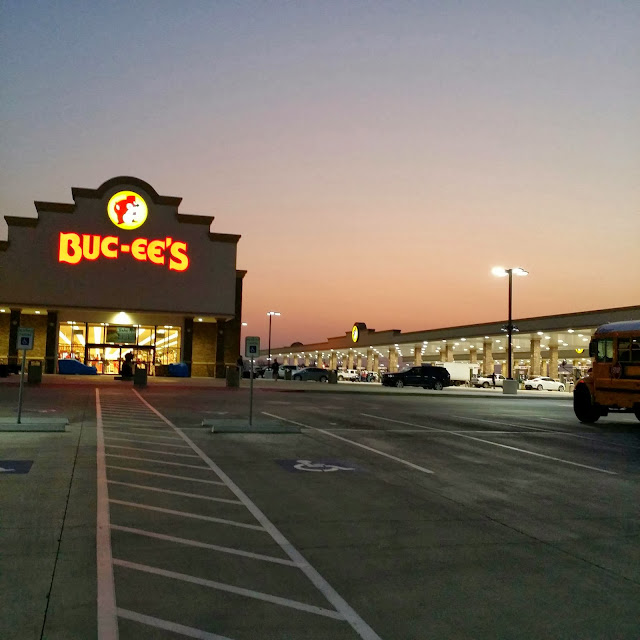 Buc-ee's is a must-stop, especially this location. According to Wiki:

The New Braunfels travel center is the largest convenience store in the world at 68,000 square feet. The store features 120 fuel pumps, 31 cash registers, 4 Icee machines, 80 fountain dispensers, tubing and water gear for the Guadalupe River, and a farmer's market that features Grade 1 fruit and produce. The New Braunfels, Texas store was named the 2012 "Best Restroom in America" by Cintas.

They also serve up some fine Texas BBQ. I love pulled pork and pork ribs, all smoky and tender and dripping with a fine Kansas City style sauce. But I've become a fan of sliced beef brisket. Buc-ee's brisket sandwiches are tender, full of flavor, yet leaner than most. Their sauce is not quite as sweet as a typical KC sauce, and it's a bit spicier, which works perfectly with the beefy flavor.

Some guys started out fabulous and just keep getting better:

We spent the night in Dublin, Georgia - just a few miles below the line separating rain and freezing rain. This morning, we started toward our next pick up near Augusta. Although the roadways were mostly dry and traffic was very light, the sights along the way told the story of the night before. We saw several houses with enormous tree limbs through the roof, the porch, the car in the yard; countless power poles broken and dangling when a large tree limb landed on the line they support; acres of evergreen trees snapped in half from the weight of the ice. As we neared the cons and the temp warmed, we encountered miles of road ditches boiling from the falling chunks of ice as it melted and fell into the water lining the roadway. Numerous roads were closed due to downed power lines and fallen trees; we were lucky to only have to detour once. Following are some pics from the trip. Again, they were taken in a moving truck through a dicey windshield so they aren't the best ... click on them if you care to see larger versions ...

Last night, my kitchen was chock full of wonderful aromas. That's Chicken Tortilla Soup simmering happily on the left, while the ingredients for a Quinoa Tabbouleh are prepped in the foreground.

As I assembled the soup, I mistakenly grabbed a can of tomato puree and had it open before I realized it wasn't whole tomatoes in juice. But I poured it into the pot, anyway, and was surprised how much body it lent the finished soup. It's going to be a permanent substitution henceforth.

Tabbouleh is one of our favorite salads. It's easy to prepare, full of bright flavors, and it's a tasty accompaniment to the sandwiches we fall back on when we're busy. Hoss suggested using quinoa in place of the usual bulgur. We gave it a try, and again, I think it's going to be a permanent swap. Although cracked wheat isn't a nutritional sissy by any means, quinoa's low glycemic index is a healthier option for him. Bonus! Since I had cilantro on hand for the soup, I subbed cilantro and basil for the usual parsley and mint.


Here's the version I made:

Combine the first six ingredients, then whisk the remaining ingredients together. Toss the dressing with the salad. Serve at room temp or chilled.
No comments:

I guess if you can describe an inoperable water fountain as being "down", you can spell inconvenience any darned way you want.
1 comment:

You know you've chosen well when your husband goes out and buys you a new boyfriend.

Meet the newest love of my life, a Samsung Galaxy Note 3:

Yeah, he's a big, beautiful beast. Note the rose gold trim. Matches our wedding rings. Hoss is such a romantic.

The cover has a small window that works with the lock screen. It allows you to answer calls and take pictures without even flipping the case open.

This phone - actually, some call them a phablet - does so much cool stuff I can't put it down. And the camera takes beautiful pics:

If the blog is slow for a couple of weeks, you now know why.
4 comments:

On Wednesday, Hoss followed through with his promise of a birthday dinner at Bonefish Grill. We started with Bang Bang Shrimp, which is lightly fried and served in a creamy, spicy sauce. Fabulous! We ordered cocktails, but I made the mistake of going with a fruity white sangria, which was much too sweet. I changed to a Riesling instead and that paired well with the rest of the meal.

I ordered one of the evening's specials, Flounder Marsala with shrimp and bay scallops. Hoss went with a shrimp fettuccine. Our sides were pumpkin ravioli, steamed fresh veggies, and a small loaf of fresh, warm French bread. Obviously, we left the healthy eating goal behind in the truck.

We were eating a few hours earlier than usual and knew we'd want to munch later on, so we took two appetizers home with us: bacon-wrapped sea scallops and Wagyu Beef and Ginger Dumplings (our server wrapped up another loaf of bread and put that in the go bag, too). That decision turned out to be genius; by the time our regular dinner hour arrived, we were ready for more Bonefish flavors.

On Thursday, we decided to take in a movie at the cinema just down the street from where we were staying. The name took us by surprise, though. "Movie Tavern"? As in, movies and beer?

That's exactly what it turned out to be. The theater seating includes small cocktail tables. A waiter brings you a menu with a surprising variety of casual dining options, including appetizers, salads, pizza, sandwiches, and desserts. They offer a kid's menu with kid foods and drinks, and - get this - they serve breakfast on weekend mornings. Their adult beverage menu offers bottled and draft domestic and imported beers, wines, spirits, and cocktails. The food - we ordered boneless Buffalo wings and a chicken quesadilla - was fresh and darned tasty. We split a bottle of wine (the same Riesling as the night before), and it arrived in a bucket of ice. If you're thinking plastic cups and paper plates, don't. All food and drinks arrive in real restaurant quality serveware. Nor was it expensive. Our matinee tickets were five bucks each, the food came to less than twenty, and the wine was no more than we'd have spent in a restaurant. I want to permanently rent a seat and just move in.

The Port of Houston

I see countless scenes daily that I'd love to catch in a photo, but taking decent pics from a moving truck is nearly impossible - IF I'm not driving at the time and IF the camera is within reach. This one is far from perfect, but I think it's a good representation of what you can see from the bridge over the Port of Houston:

I love the view from this bridge. There's always something interesting to see.
No comments:

Finally approaching the edge of the wintery weather, but there's still rain ahead.
After delivering near Pittsburgh, we ran a couple of very profitable short runs, then got a run back down to Texas. We are out of groceries, I need to do laundry, and as always, we need a hot shower. But we're feeding the bank account instead of sitting. 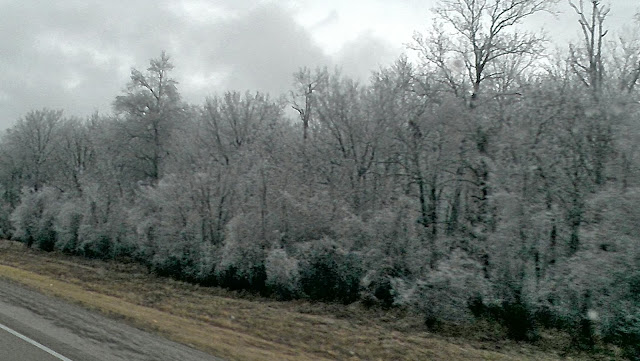