Valves Out, Valve In

On Thursday evening, we loaded two valves at the St. Lucie Nuclear Power Plant on Hutchinson Island, Florida. We were to deliver immediately to a testing lab in Huntsville, Alabama, placarded as a Radioactive load.

En route, we were offered the job to return the valves back to the original shipper at St. Lucie NPP. The total compensation was generous, so we happily accepted.

After the drop, we waited at a Walmart parking lot near the testing facility for about 24 hours. Ultimately, only one valve was ready to return to St. Lucie. The other would have to wait.

By the time we'd delivered, we had fielded a dozen phone calls about the load - from multiple people each at the broker office, the shipper, and the consignee. As we drove the single tested valve back to St. Lucie, the next dozen calls occurred, five occurring in the last two hours. Where were we? What mile marker? What traffic conditions did we expect? What route did our GPS have us taking?

As time-based contractors, we are well versed in expedited shipments. When the calls come from dispatch and the Qualcomm beeps incessantly, it's usually the carrier freaking out. The shipper and or cons might not give a wet fart whatsoever, but dispatch has been told to crack the whip and push that load to the destination as fast as possible. Why? Because that's their market niche. On time, every time. Whether you want it that early or not.
Landstar? Quality over uber fast. Every time. They may call for an ETA every few loads because the cons is curious,  or the cons may call directly because the guy in Receiving is supposed to show up for a few minutes to unload us after hours and he doesn't want to hang out there more than necessary. But this was different. The level of communication was deeper and more analytical, the import of our ASAP arrival was clearly indicated - we were even told with a nervous laugh how many people were standing around on the Receiving dock awaiting our arrival.
We were hours ahead of schedule, yet the inquiries still came.
Finally, we arrived at the Cons and were waved into the delivery area by an anxious employee.
Eight men in hard hats and safety vests descended upon the truck. There were dry jokes and nervous laughter between them as a colleague ran a Geiger counter around the truck box and swiped the crated valve with indicator wipes. Finally, he waved the high - low toward the pallet and slowly, carefully, the valve was removed from the truck.
Watching this from the ground, surrounded by nervous engineers, I asked the one to my left, "I take it this part is holding up something important?"
He chuckled, nodded a bit, and said "Yeah. The plant's been offline since you left Thursday. It's not coming back online until that valve is reinstalled."
So I apologize to the residents on Hutchinson Island who may have experienced a brownout while I sat in a parking lot sucking down a juicy Southern Chicken Breakfast Biscuit. I was uninformed.
And hungry. Sometimes very pretty things occur right in front of us. The trick is to see it when it happens.
No comments:

and not a penny more, dammit! ... of bushes in Florida are home to at least one skittering lizard.
No comments:

We took a load to Fort Lauderdale late in the week because a) it paid well and b) it's not snowing there. Freight is hard to get in Florida, though, so we expected to have to deadhead up to Atlanta, as we usually do when delivering there, in order to get our next load. Instead, we got an offer to drive a Hazmat load from a nuclear plant in Port St. Lucie to a facility in Huntsville, Alabama. Sweet!!

Even sweeter, we were offered the return trip for the same equipment, back to Port St. Lucie. With detention and layover pay for a delayed shipment, this job is turning out to be much better than a deadhead to Atlanta.

And it's not snowing!

Some Foods Are Just ... Wrong

Not on a bet. And probably not even facing starvation.
No comments:

If you cook only one thing from scratch this month, make it this recipe. You'll thank me.

In a large skillet, cook the bacon until crisp. Remove the bacon and drain on paper towels. Pour off all but a tablespoon of the bacon fat. Return to the stove and saute the onion until softened. Remove from the pan and toss together with the bacon. Set aside.

If corn is in season, it's well worth your time to cut it fresh from the cob and use it raw. The sweetness of the fresh corn will amaze you. But you can substitute thawed frozen corn or canned corn, if necessary.

Fold the corn and half of the bacon and onion mixture into the batter.

Bring a greased griddle or skillet to temp over medium-high heat. Create griddle cakes using about 1/4 cup of batter for each. Cook until golden brown - about 3 to 4 minutes - then flip and cook the other side.

Serve with a generous spoonful of the bacon and onion mixture, as well as a spoonful of Jack cheese. Top with syrup, if desired. 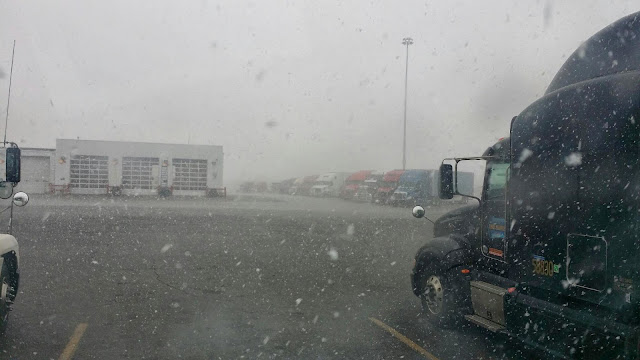 
Possibly the most amusing BBQ slogan I've ever seen. With that attitude, I'll bet their BBQ is awesome!

We had an awesome Black Eyed Pea Salad in the fridge and needed a protein that was, oh, tender-succulent-smokey. Since tonight's destination was Texarkana, we opted for Big Jake's BBQ:

Wow. Despite being chopped, you can see the smoke ring around the edges of the chopped beef.

Less than 8 hours in Houston, and a good weekend load comes our way?

Parking Barriers Have No Arms

Breakfast was a chopped hash of corned beef, potatoes, onion, pepper, and other goodly ingredients.

Who says Anglo-Saxons have lousy food histories? This is good stuff!
1 comment:

A view of the Sarah Mildred Long bridge and the newly reconstructed Memorial bridge in Portsmouth harbor. Pic taken from the Piscataqua River bridge as we crossed it going North on Tuesday (3/11).

A few more pics from our delivery to my home state:

A mile or so North of the Piscataqua River bridge, in Kittery, Maine: Yes, that's a lobster painted on the side of an industrial gas tank. No, I don't know why. I surmise it's the local equivalent of Pancake Bunny.

A fiercely defended Maine favorite, you can't walk through a grocery store without tripping over pallets of the stuff. And despite my ability to trace my Maine ancestry through the Colonial Wars, in truth, I never really enjoyed Moxie. But I'm all over daring my friends to drink one. :) 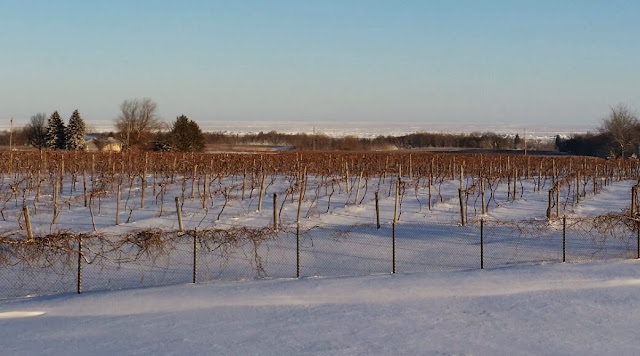 Seen in a Sams Club in Augusta, Maine. We Mainers know how to party. 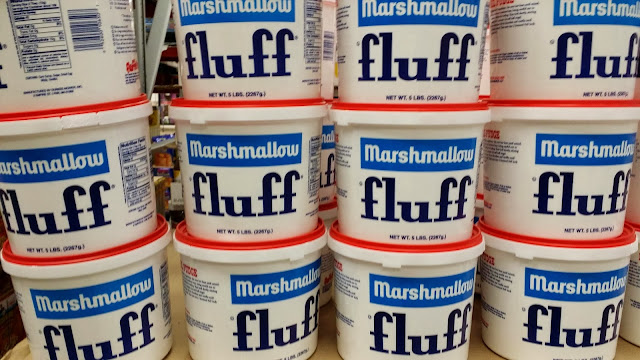 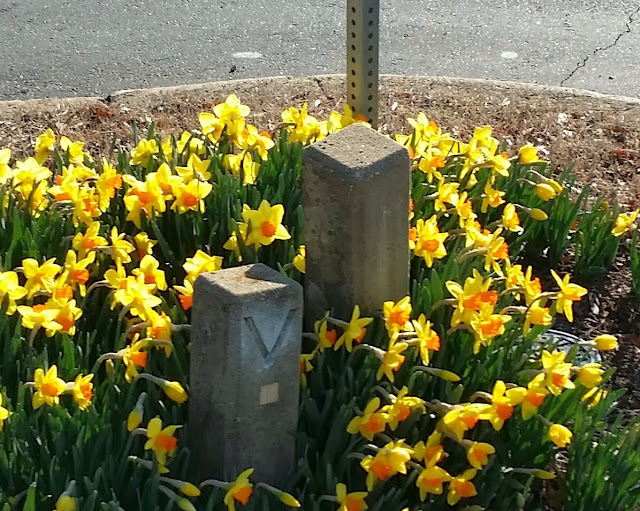 On occasion we all come across a recipe that haunts you until you cave in and cook it. Sometimes, this results in a new family favorite. And once in a while, it turns out to be your next Project.

My poor kids ate a variation of Key Lime Pie for two solid months as I sought to recreate a recipe from a restaurant I'd visited. I finally came close enough to the original that, satisfied, I moved on to another Project. I'm sure the kids were quite relieved.

A week ago I encountered a recipe on my favorite food blog that I had to try, a baked spaghetti squash casserole that mimicked a much heavier, carb-y, fattening dish: Spaghetti Carbonara. I knew from the ingredient list that I could bring down the fat grams even further, without sacrificing any of the flavor.

On the first pass, I faithfully followed the recipe. Surprisingly, the recipe called for cooked spaghetti squash to be tossed with wet ingredients and then baked for 45 minutes.

Hold on. In order to get that squash to produce spaghetti-like strands, I have to steam it to the stage of being fully cooked. And now it's to be baked in a custard for three quarters of an hour?

Not surprisingly, the finished product was a dish of mush. Tasty, but mush nonetheless. The subtle squash flavor was present, and here and there an intact squash strand appeared to remind you that this is a spaghetti knockoff. But ... disappointing. It needed texture, something that would stand up to two periods of cooking, yet mild enough to not usurp the Carbonara flavor medley.


Scrub the squash, then stab deeply with a large knife several times to allow steam to escape. Microwave on high, turning frequently, until the squash surface gives to a firm squeeze, about twelve minutes. Remove from the oven and set aside to cool enough to handle.

Using a sharp knife, separate the washed cauliflower into thimble-sized florets. Place in a microwave safe bowl with 1/3 cup of water, cover, and microwave on high for three minutes to partially steam. Remove from oven and set aside.

In a heavy skillet, cook the bacon over medium heat until the edges crisp. Add the onions and cook for 5 to 6 minutes or until soft and beginning to brown. Remove from the heat.

Place the eggs or egg substitute in a small bowl, then vigorously stir in the ricotta. Fold in the cooked bacon and onions, then 1 cup of the cheese, grated, and the salt and pepper. Set aside.

Slice the slightly cooled squash in half lengthwise. Scoop out the seeds and rough membrane and discard. Using a fork, scrape the squash into spaghetti like strings. Place in a large bowl and set aside.

Drain the cauliflower, then add to the bowl with the squash. Add the sauteed bacon and onion to the vegetables and toss together. Add the egg and cheese mixture, toss together, then turn into a shallow 2 quart greased casserole. Top with the remaining cheese, then bake at 350 degrees for 30 minutes or until set.


Flavor. And texture. No mush.