I had a friend who lived in Jasper, Alabama. She was crazy about the color pink. Pink this, pink that, pink everywhere. At Xmas, she had a special, small tree - in addition to her other two Xmas trees - that was entirely decorated in pink. And not only did she admit to it, she bragged about it.

I have rarely rested my eyes upon a pink Xmas tree, but we ran into this specimen at a Waffle House in Conway, Arkansas:

I have no doubt that you'll agree it's an exquisitely beautiful pink Xmas tree. However, they, too, had an alternate, traditional tree on display.

Which prompts me to ask -

Is this pink tree phenomenon a Southern thing??

Does a pink tree always have to be accompanied by a traditionally decorated tree?

We had spotted this diner along our way up to Chippewa Falls (Wisconsin, jeez, you guys!), so when our load back south took us by there again, we had to stop.

With a laminated plastic menu that boasted scores and scores of breakfast options, it took a few minutes for us to decide.

As low carbers, our choices are usually some form of omelette and a side of meat. This was no exception. But ohh, such a good plate-o-food!

And while we sipped coffee and waited, we absorbed the diner ambiance.

Not really. It was nice, but not something to "experience".

Still, it beats the crap out of a Dollar Menu burrito. 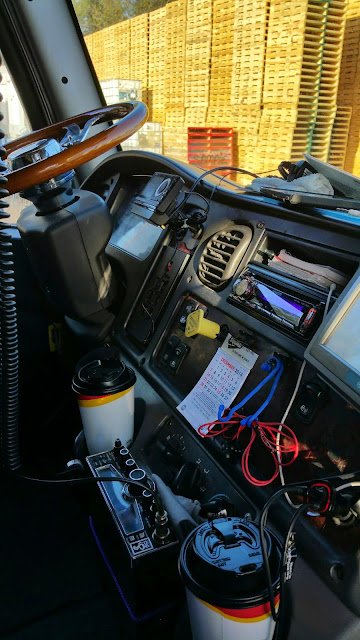 .... or is it the next best thing to the Blue Light Special?

A very pretty sight when I stopped at a rest area this morning! I love how fog adds drama to nighttime scenes. 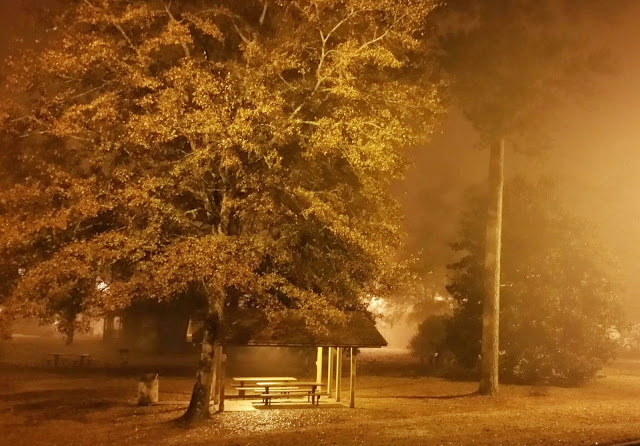 Weather on the Eights

I really expected a more impressive building. And one that's tornado proof.

They're Trying to Tell You Something

The tape doesn't bode well at all. If I were Louis and Missy, I'd have another job lined up asap.

Sugar is an integral part of Texas history. The city of Sugar Land was built on an operating sugar plantation. Its story is fascinating as an example of a massive company town.

When slavery was abolished, Texas came up with another source of constant and guaranteed labor - they built prisons on sugar plantations and used convicts as their labor force. In less than seven years after the end of the Civil War, twelve of Texas's eighteen sugar plantations utilized more than a third of the state's prisoners.

We have ancestors who left Ireland and England in the 19th century for Caribbean sugarcane plantations. I suspect that, instead of producing sugar for its own sake, their sugarcane was used to make rum.

That's the nickname of Greensburg, Indiana. If you look closely at the photo of their courthouse you'll discover why. 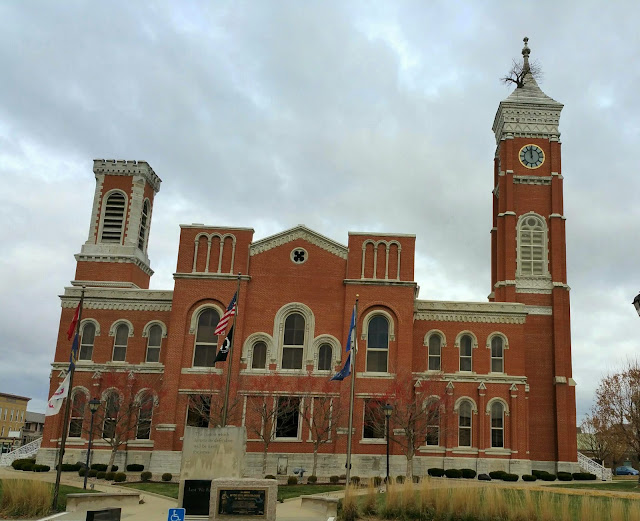 I love these little towns. Each is unique in its history and architecture and attractions, yet they all share a strong sense of community: everyone roots for the high school football team, the one outstanding cafe is always packed at lunchtime, and everyone knows - and cares - about everyone else.
This is Raymondville, Texas. We came upon it last Thursday while taking a more scenic route from Brownsville to Laredo.
Make me wanna open a donut shop and become a local. 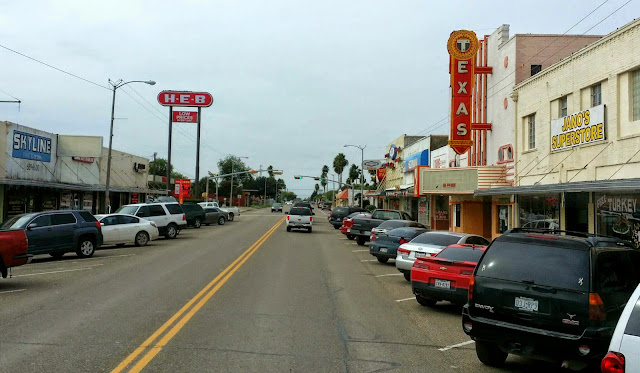 On the lookout for love in Laredo.

He may have to search for quite a while; in the hundreds of times we've driven past this patch of desert, he's the first mammal I've spotted. 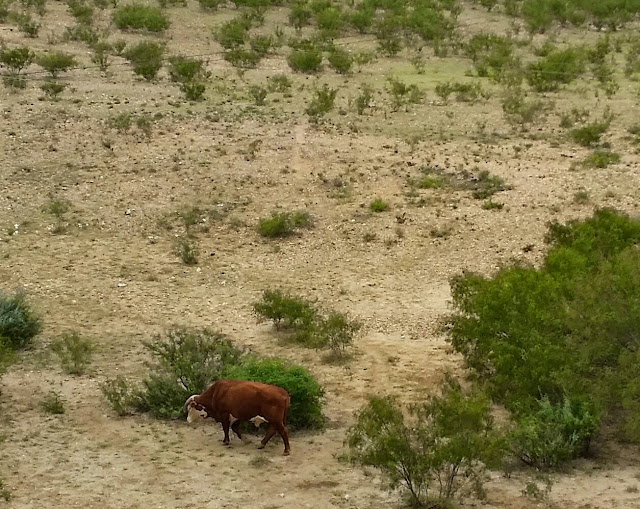 Candid pics of the wedding, in approximate order ...

Shoulda Thought This Out 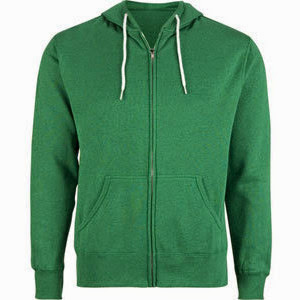 After four winters of hard labor, Hoss's familiar old brown hoodie was retired. Early last spring, we bought a new one for both of us at end of season sales. They were promptly zipped up in a space bag and put into storage.

When we went back to Syracuse last month for our twice annual doc appointments, we swapped our summer clothes for winter ones and the hoodies were hung on our respective hooks in a corner of the sleeper.

A week or so later, on a rather chilly night, Hoss prepared to fuel the truck. He pulled on his new green hoodie, zipped it up, and proceeded to complain that it had shrunk in the wash. I sympathized while he pulled and stretched and forced the damned thing to return to its purchased size - a ritual that was repeated 3 or 4 times in the next couple of weeks.

Today, we decided to walk to a nearby Denny's for breakfast. The weather was very damp and breezy, so I took my wonderful brand new maroon hoodie down from my hook and pulled it on. It felt ... kinda large. I've lost ten or twelve pounds recently, and my favorite capris and jeans are now too big. Hrm. Maybe I'd decided to buy it a size up so I could layer underneath it?

As we wrapped up breakfast, I gathered my things and glanced at the size tag. 3XLT. What?

"Why did we buy me a 3XLT hoodie?" I murmured aloud. Hoss momentarily froze, then grabbed his green hoodie and looked at the tag. "XLT," he said.

He now has a beautiful new maroon hoodie that fits perfectly, and I have a green hoodie that's a little stretched out and smells like diesel.
2 comments:

Rarely do I discuss freight with the kids. Most of the time, it's boring stuff like truck axles and paint and machine parts. Our most recent load to a Texas border town was pallets of game even I'm familiar with, so I mentioned it in a text conversation with two of them after we'd unloaded. Their responses were hilarious: 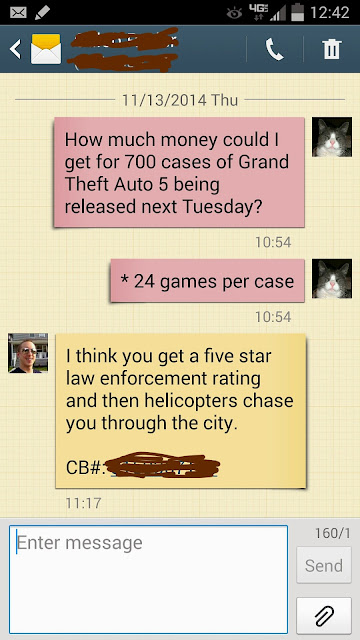 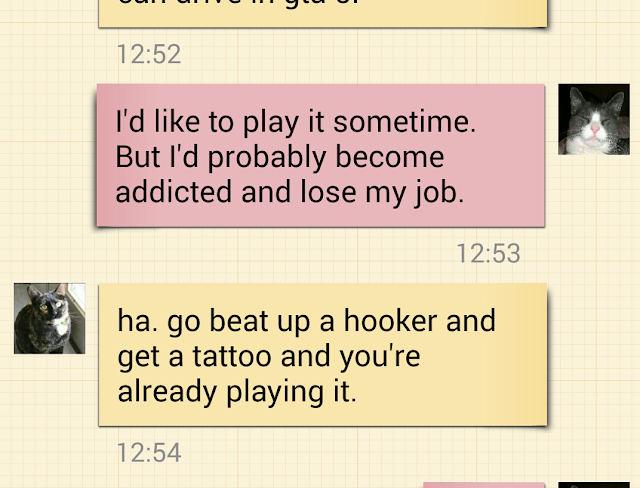 Although I hate infering that I'm getting old, at least now I'll never forget what day it is. 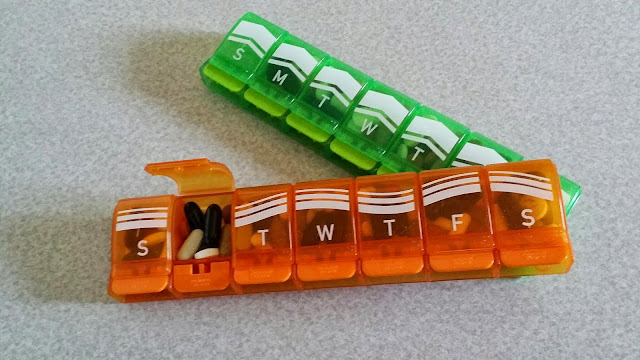 A Little Cabin in the Woods

We came here to attend the Saturday wedding of Hoss's niece, Jess, and her fiance, Robbie. Her brother, Jason, had found a cabin in the woods for us to share - he, his mom and her beau Gary, and we two.

Each turn took us onto a narrower, less traveled road, until we ended up on a rugged, leaf-covered trail that was barely wide enough for our rented pickup:

And then, the cabin appeared:

Inside, it was calming, charming, and well appointed. Even with the leaves mostly dropped, the only sign of civilization was the owner's home several hundred yards away through the woods (and even then it was barely visible). It was extremely peaceful, with only bird calls, woodpeckers, and chipmunks to be heard.

Chicago, In and Out

We scored a rare round trip on Friday, hauling audio-visual equipment from Atlanta to Chicago and back again. The first delivery, in Chicago, took place on Monday morning right on the Magnificent Mile. I had a great time taking pics while Hoss drove.

We even ran into a couple of landmark eateries on our way back to the truckstop, including Al's Italian Beef:


And Ed Debevic's, right across the street:

On Tuesday night, we went back to the hotel where we'd dropped to pick up the equipment and return it to Atlanta. I caught a couple more inviting restaurants:

Chicago reminds me of Manhattan, but with only a fraction of the traffic and without the throngs of pissed off subway commuters. We've decided to take a few days off sometime and explore Chicago properly - via car and with a map of legendary local fooderies.

And a list of Blues Brothers movie locations.
2 comments: