The City of Brotherly Love

A couple of weeks ago, we accepted a load from Memphis to Philadelphia. We've driven for this shipper before, but to different destinations. Each time, we were loaded with currency. Cash. Clams. Wampum. Cabbage.

This trip took us to the Philadelphia Mint. Philly is a tough town to drive. It's old, the streets are narrow, and the city planners made sure to include copious acute angles. But committed we were, and off we went. 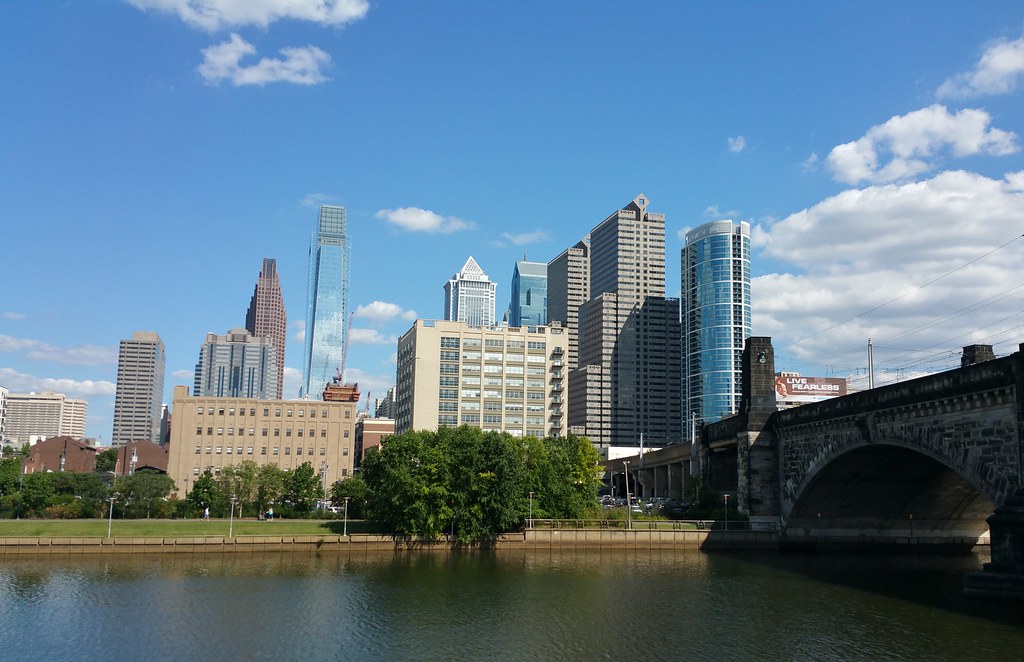 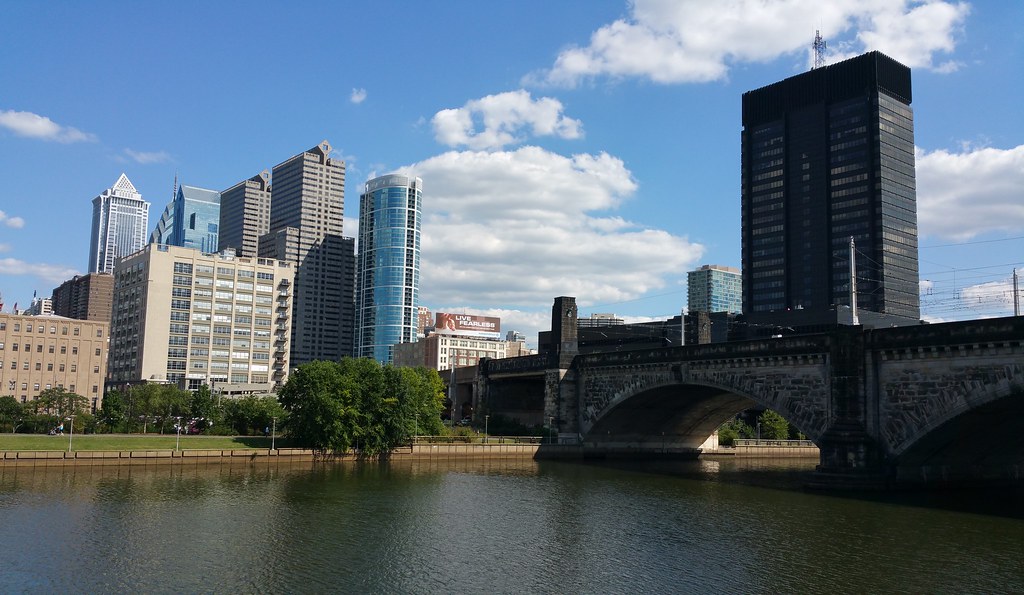 Of course we arrived at rush hour. Our delivery time was 4pm. The traffic jams did allow me to snap a few decent photos, however. 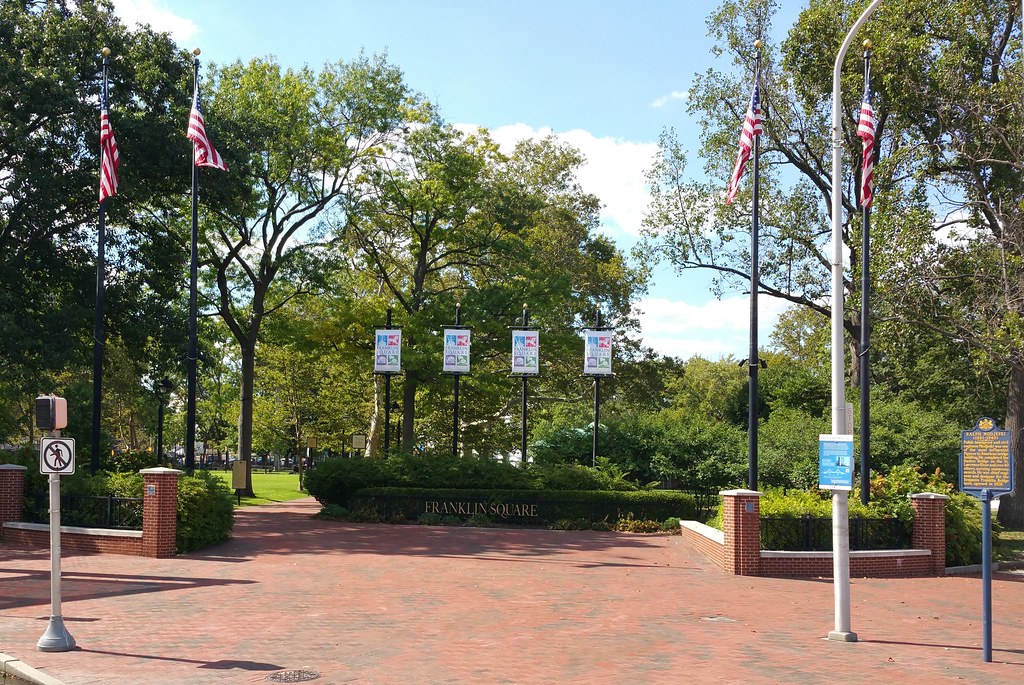 and Independence Hall, where Willie Nelson wrote Stairway to Heaven: 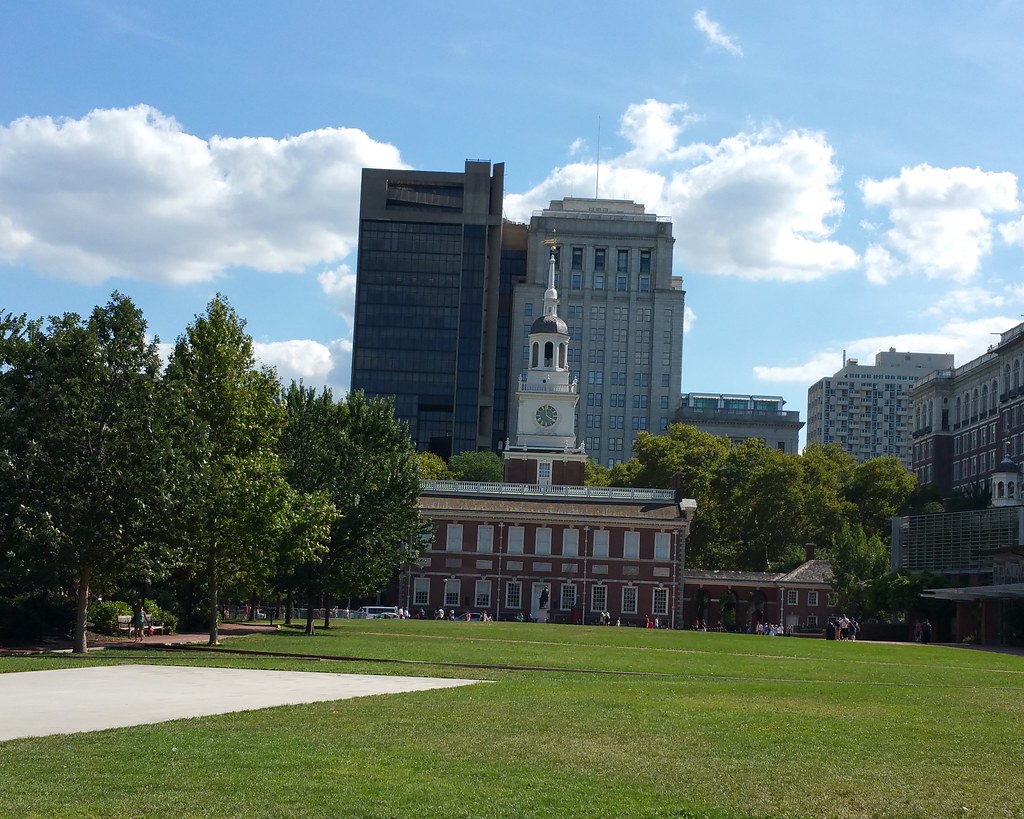 Finally, at the Mint! 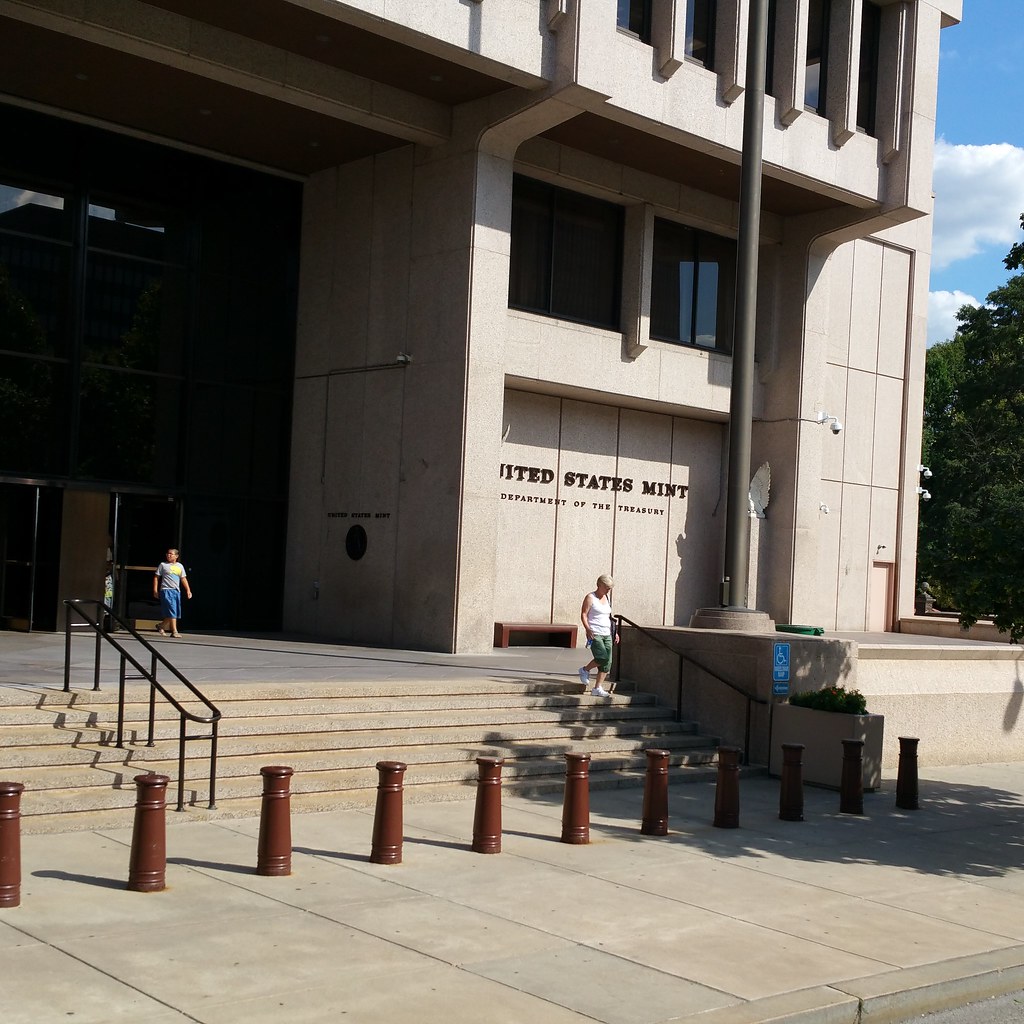 The guard shack was empty. A loading door offered an intercom. I pressed the buzzer, and in a moment, the door began to open. Unfortunately, it wasn't opening on my behalf, it was opening to allow egress for the last truck of the day. A very stern and serious cop-like person noticed me hanging around the now opened door and asked me WTF I wanted. Well, he didn't use the F word, but his body language sure communicated it. I explained that we had a delivery, and he then explained that we were too late. "Last delivery is 3:30," he said, and then followed up with "You need to move that [body language, insert: "goddamned"] truck right now." This was my first exposure to the United States Mint Police. Yup. And apparently they aren't allowed to have any fun whatsoever, because this guy was waaaayyyyy overdue on grins and relaxation.

Ugh. Dispatch dropped the ball again. Off we went to a not-so-nearby truckstop for the night. Per protocol, we handed the problem over to dispatch. They would contact the brokered company and the Mint and set up an agreeable appointment time.

Oh, and doggone it, they need to run a background check on youse guys first.

So the next day, Friday, we waited for instruction. Hoss, focused on delivering this damned load so we can score a weekend load, made nearly a dozen phone calls over the course of the day. His efforts were all for naught, however. We had to sit on the load through the weekend while dispatch tried to figure out this super perplexing and vastly complex problem of when can we dump these 380 pounds of gold coins and move on?

Now had we known that we'd be stuck in Philly for days, we could have rented a car and gone sightseeing. Cheese steak sandwiches! The Liberty Bell! The Chemical Heritage Foundation! But most importantly, the Mutter Museum. The Mutter! I've wanted to go for decades!

No. We're on layover and standby. The Mint Police might suddenly decide to take care of outstanding business and invite us in. ~sigh~

Finally, a dispatcher with slightly more than half a brain figgers out that we can unload early on Monday morning. FanTABulous!

We drove in 90 minutes early because we wanted to avoid rush hour traffic, and we parked within feet - no, seriously, FEET - of Ben Franklin's grave to wait it out. I was tempted to dash out of the truck and take a picture, but my hair was a mess.

At 7am sharp, we trundled toward the Philly Mint guard shack and waited across the street from some very authentic and old townhouses that caught my eye.

The guard, a pleasant and affable man, took our information and instructed us to wait at the door for it to open. When it did, this is what we saw: 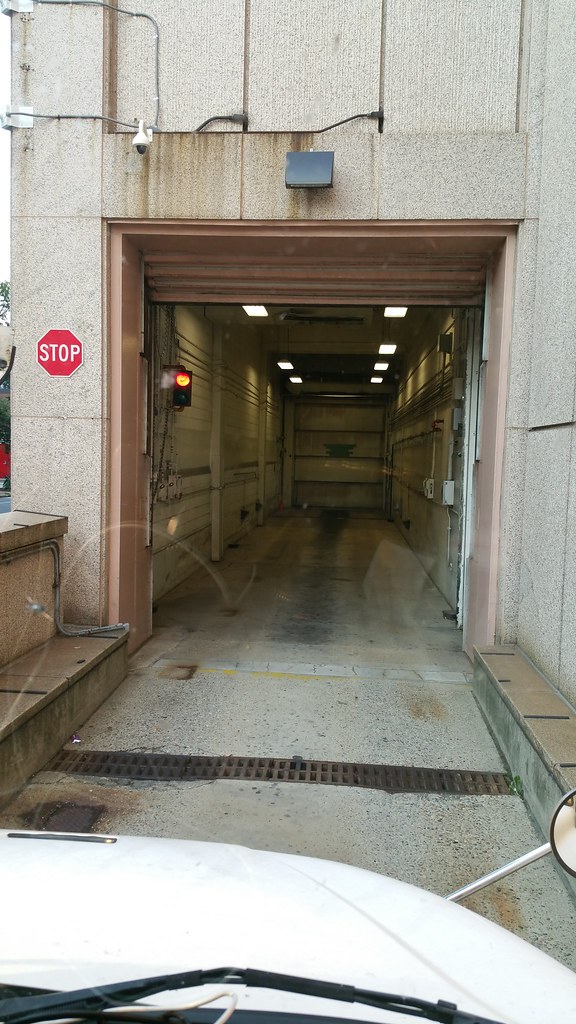 My claustrophobia kicked in with extra anxiety. It's ... a truck tomb.

Inside the entry, another Mint Police guy emerged and asked for ID. After only a few minutes, the door began to open: 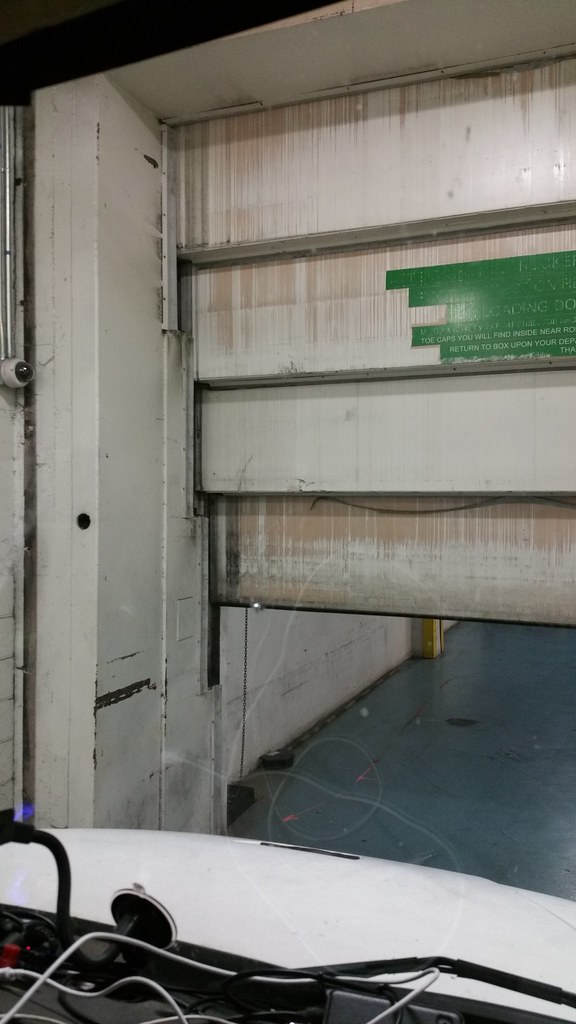 and I must admit, their doors are far more robust and sturdy than most

We were so deeply encased that the GPS lost its mind: 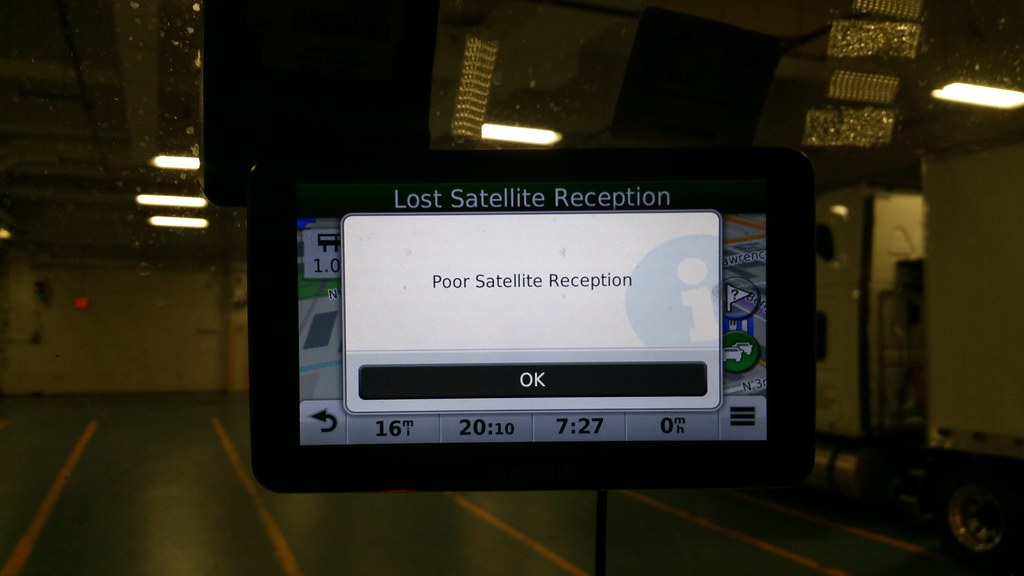 But a successful delivery was had by all and we FINALLY offloaded 380 pounds of gold value.

No, it was not enough to sustain us through retirement. I did the math, trust me.