Annually upon the advent of autumn, our tastebuds begin to clamor for apples - crunchy, juicy Macs; sweet Jonagolds; tart, white Paula Reds; and my favorite for cooking, the 20 Ounce.

Steve bought several apples a week through September, but after a while his enthusiasm waned. One day I gazed at two good-sized apples that had traveled a few miles too far, and thought: Apple Crisp!

Our sleeper has a microwave, but let's face it - nuking Apple Crisp results in semi-poached, partially steamed, Soggy Apple Stuff. If that's your goal, great! But Soggy Apple Stuff is not tender wedges of peeled apples in a naturally reduced syrup, topped with lightly browned, crispy, sweetened oats lightly dusted with cinnamon. Sometimes, our cravings are quite specific and demand satisfaction.

We may not have a super-sized luxury sleeper complete with RV-sized oven and stovetop, but we do have a secret weapon:  the George Foreman Evolve Grill.

I love this thing. Beyond grilling anything imaginable, it will also roast, braise, stir-fry, and even bake, although my experience baking with it was limited to savory herb & cheese biscuits made for an occasional breakfast. But even if the attempt was a flop, we would still have Soggy Apple Stuff.

I sharpened the paring knife and set to work... 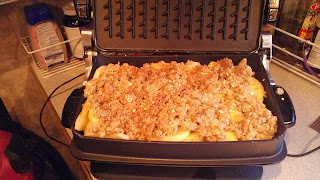 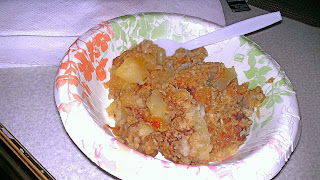