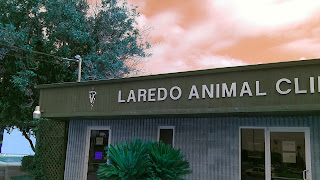 Paisan has been under the weather lately. No dramatic changes, just less playful and interactive. I've kept a careful watch, but with no fever and no apparent pain, observing was all I could do.

Yesterday, as I dusted and swept the sleeper, Paisan bonked my shins to remind me it was snackie time. I obliged, putting a half-dozen crunchy treats on her food mat. I heard her crunch through one, then she let out a very loud hiss and a yowl and scampered up the dinette cushion to her "upstairs loft" - an overhead cabinet that belongs exclusively to her.

Procuring medical treatment while on the road is one of those vastly frustrating and often near-impossible tasks with which all hot freight contractors have to deal. Between loads, we never know how long we'll be in our current spot, let alone where we'll be the next day. The best scenario is to be dispatched on a load with enough time built into the delivery schedule to accommodate an appointment along the route.

At that particular moment of enlightenment, we weren't yet dispatched. Do I try to get an evening appointment with a vet there in Laredo? We could be offered a load any minute that would require rolling immediately. It didn't seem fair to the vet to make an emergency appointment and then have to cancel.

I analyzed. The cat had not lost weight and had been eating regularly up until the Hiss-n-Dash manuever. We had plenty of canned food available, so she wouldn't have to risk more pain by gumming down Chicken and Trout in Savory Gravy for a few days. I decided to wait it out.

Within an hour, we were offered a load that didn't pick up until late the next day. I set about finding a vet with Saturday hours that would take a walk-in and settled on Laredo Animal Clinic. Paisan eventually emerged from her loft and ate her dinner, then snuggled most of the evening with Mom.

The clinic was very busy the next morning, but the staff remained pleasant and the clients were all patient and friendly. In only an hour, they called us in to the exam room. After the vitals were taken (Mom and Dad aren't the only ones with "Seat Creep" - she gained a full 1/2 pound since January), the vet had me open her mouth (chicken!) and there they were - two premolars, one on each side, grey with tartar and surrounded by swollen red gums.

"We can clean off the tartar and perhaps save them," the vet said. "But more than likely, they'll have to be extracted. Can you bring her back on Tuesday?"

Here we go. "I don't know. We drive truck and never know where we'll be day to day."

Sigh. "How much advanced notice would you need?"

"Great. I'll call as soon as we can get her in. Is there anything we can do for her in the meantime?"

"Oh, yes, I'll give you some oral antibiotic for the infection and flare-up."

I managed to talk her into giving me 3 weeks of medicine, which I hope will tide Paisan over until I can schedule extractions.

I can't wait to start the twice-daily medication struggle, but I do hope it fixes her up for now. Poor kitty.