Just 20 minutes or so after loading in Fort Wayne, Hoss abruptly tapped the turn signal and took an off-ramp from I-69. From the passenger seat, I gave him a quizzical look.

"Meijer's," he said, and I grinned in return.

Meijer's is a regional store chain located in the Upper Midwest. Roughly half of each store footprint is grocery; the remainder is a variety store cross between Target confidence and KMart despair. While as a whole they're mostly clean, mostly fresh, and fairly well stocked, Meijer's grocery can't hold a candle to Wegman's. But they do stock something Wegman's doesn't: 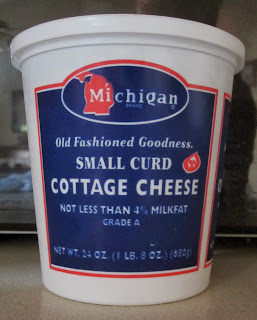 If you're under 40, you don't remember really good cottage cheese ... the kind that stays stuck in the spoon when turned upside down; the kind that has a substantive resistance to the tooth and lends a brief and very pleasant stickiness when chewed; the kind that tastes like the beginnings of a thousand different cheeses rather than a bite of lumpy milk.

Unless you're lucky enough to know about Michigan brand, that is. This stuff is still made like all quality cottage cheeses were made in the Northeast years ago - before manufacturers began to gradually thin out their product with less expensive milk and attempted to boost the resultant weaker flavor and texture by adding sugars and natural gum thickeners. In time, modern cottage cheese, well, sucked.

Whenever we have the time, we try to stop at Meijer's.

This time, I bought three and a half quarts. That should last us a couple of weeks.