We've now visited each of the lower 48 states!

It took 4 years, 4 months, and 10 days, but we finally visited the two remaining states, Montana and Washington. On Thursday, we accepted a load offer from Houston to Seattle. The Northwest isn't a busy area for expedited freight, so each load offered to this area has to be considered with a potential wait for a load back east, or a very long deadhead to a busier area. This job paid well enough to mitigate either possibility.

When we left Houston, the temps were in the 90s with 80% humidity. It was what my grandfather would have called "close". I have a different word for it that's not as gentlemanly. As much as I love Texas, I was glad to leave that weather behind. We spent Thursday night at the Winstar Casino and celebrated Steve's birthday with a nice dinner, a few cocktails, and the most fun one can have at losing hard-earned money. 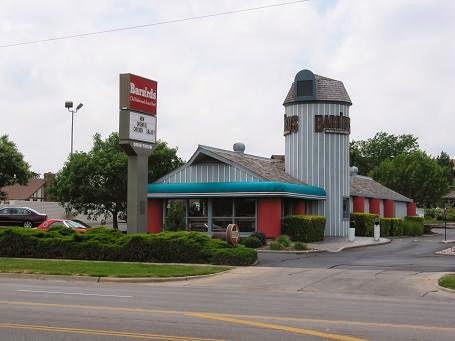 Our route took us through Wichita. I've been pining for a Barn'rds roast beef sandwich for, oh, twenty two years now. My beloved foodie husband readily agreed to the detour. Some things have changed. They have a few more menu options, they no longer make their own lemonade, and the multigrain buns have been replaced with a classic smooth-topped bun that had the same heft and soaked up all those delicious roast juices like the original. The original owner was working the counter, and since we were there mid-afternoon, she had time to chat a bit. She was thrilled that I came back just for their sandwiches, and was just as thrilled when I told her they were exactly as I remembered them. After our late lunch, I ordered four more for the road. I suspect we'll be stopping there again in the future.

In Wyoming, we drove into a hailstorm from hell. The stones were big as a quarter and they just poured from the clouds above. Luckily, we came upon an overpass (there aren't many crossroads in the badlands of Wyoming) and parked until the storm passed. There were actual drifts of hail in the road. We have an a/c unit on the roof of the sleeper, as well as a satellite dish and several specialized antennas, none of which were built to stand up to a barrage of ice cubes, so the overpass was fortunate, indeed.

Our 47th state, Montanta, was a pleasant surprise. I knew the western third of the state is all Rockies, but I didn't expect such a beautiful combination of high plains and foothills for the remainder. It's gorgeous. I like it there far better than the more celebrated Colorado, Utah, and Idaho.

After a quick jaunt through the chimney of Idaho, we arrived in Washington. Frankly, eastern Washington state is pretty boring. Things picked up as we approached the Cascades, when signs for chain up laws and runaway truck ramps and references to The Pass started to appear: "Best Food This Side of the Pass!", "Sno Pass Truck Repair", "The Summit Restaurant and Lounge", "Weather Conditions for the Pass, call *555", "Tune radio to 1610 for Pass Weather". As we approached the notorious Snoqualmie Pass, the temperature outside was 35 degrees and it was raining.

We've conquered many infamous mountain passes. The most harrowing was Loveland Pass, Colorado. Placarded hazmat loads are prevented from using the Interstate tunnels, so we had to use Loveland Pass west of Denver to cross the divide. It's two lane, with no shoulders, nearly twelve thousand feet above sea level, with abrupt dropoffs of thousands of feet and hairpin turns that will curdle your coffee, and all of this with a grade of nearly 7%. We've crossed it twice in the summer months and once, in winter, during a snowstorm.

Steve has never really recovered from THAT trip.

So with all the roadside hysteria on our approach to Snoqualmie Pass, I expected a road engineered by certifiably demented mountain goats. Instead, it was kind of wimpy at just over 3,000 feet. Even with a 5,000 pound load of sloshing poisonous substances, we made the climb easily.

Wha--? Why then, was there such a panic over this piddling little hill?

As for the 48 state accomplishment, I may be able to talk Steve into taking a job to Alaska but driving to Hawaii isn't likely to happen. Stay tuned. :)