A Fretta at the Gardenview Diner 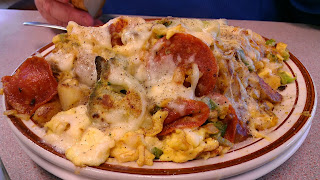 There are a lot of diner options in the Syracuse area. One that we've driven by a thousand times but never tried is the Gardenview Diner.

Well, that's our loss. The Gardenview serves up an outstanding Fretta. Pictured above is their half order, served with melted mozzarella.

A Fretta is a regional dish. There are Frittatas from coast to coast, and occasionally we'll run into a restaurant that serves up a Super Scramble or Cowboy Hash, or some other variation. But a real New York Fretta always includes Italian flavors: pepperoni, sausage, onions, peppers, and is frequently served with marinara and cheese.

I've always wondered why two similar dishes with similar names needed differentiation. You say Fretta, I say Frittata? Nope, they really are two distinct dishes, both in preparation and presentation. A Frittata is a dish of eggs and desired additions that are mixed raw, then left untouched while very slowly cooked until set. The result is a crustless quiche, really. A Fretta, on the other hand, is assembled as it's being cooked, and it's cooked much more quickly. The term "fretta", in fact, is Italian for "hurry" or "haste" - a dish well suited for diner fare.

The Gardenview's menu lists this dish as a Frittata, but with all due respect to the owners, it's a Fretta.

And one of the best Hoss has ever had.