Sitting in Houston, watching it snow and sleet and wondering what the hell happened to the annual January Thaw?

The slow freight has given me a chance to go through pics from last year and, not surprisingly, those that feature sunshine and fair weather are quite attractive today.

While on a load to California about a year ago, we suddenly realized we'd forgotten a paperwork deadline with our carrier. Hoss took the next exit, parked the truck in a dusty, empty lot in front of a long abandoned building, and started preparing BOLs and fuel receipts for Transflo. I grabbed my camera and went exploring. According to a sign on the building, we were in Thoreau, New Mexico... 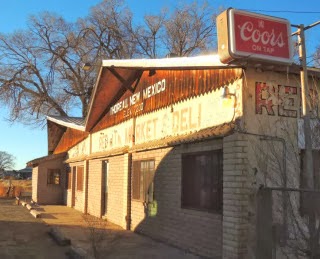 As seen from I-40, there is nothing else in Thoreau, New Mexico except a repair shop several hundred yards west of where we're parked (don't think so? check the Sat pic)... 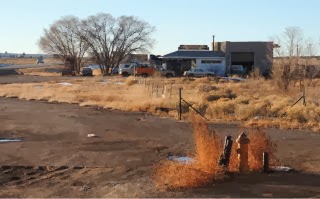 The last time this venue was open, coffee cost twenty-five cents and the pizza was fresh... 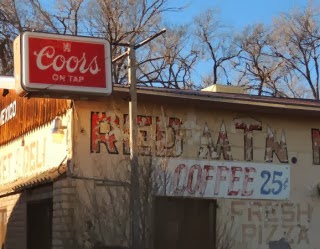 And the Red Mtn Market & Deli might have served up a mean balogna sandwich...

At one time, Johnnie's Inn did offer ice - always a nice touch in the high desert at more than 7,000 feet above sea level and only a few miles from the Continental Divide... 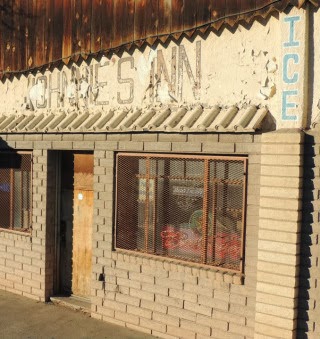 But, dagnabbit, this building was currently empty ... completely bereft of life... 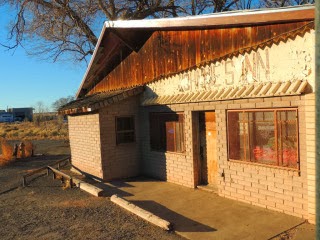 Or was it? On the door of Johnnie's was a recently written note... 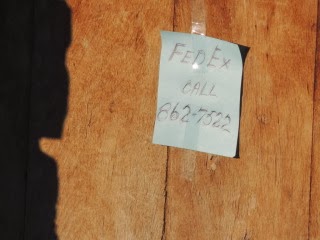 But there were no cars or any sign of life at all. I peeked in the windows and didn't see anything that led me to believe Johnnie's was a living breathing business. I turned away and went back to taking pics.

Just a few minutes later, an old green pickup pulled in and parked in front of Johnnie's. The gentleman inside rolled his window down and sat quietly, smoking.

Had we been spotted by a local and Johnnie had dropped by to make sure we weren't going to steal his Coors sign?

Then another pickup turned in and parked. An older couple sat inside and chatted.

I walked around the corner of the building and took a few more pics. Two more pickups showed up.

I went back to our truck and climbed up into the cab, where I could watch the goings-on without being too obvious.

At precisely 4 pm, a dusty old sedan parked at the end of the lot, and a spry old man emerged. He smiled widely, waved at the truck occupants, and unlocked the door. The others got out of their vehicles and followed him inside, chatting and laughing with each other.

Johnnie's Inn was open for business.