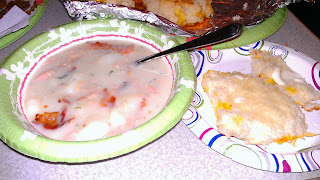 Caution: my Maine roots may have subtly influenced the following post.

Clam Chowder is one of the easiest and most satisfying soups to make on a cold night. A couple of potatoes, a bit of onion, a can of clams, milk or something like it, and a few crumbled strips of bacon - shoot, you can make this stuff in a microwave if necessary.

Chowder certainly didn't originate in the New World; fish chowders have been served in seaside villages since the invention of dirt. But the addition of clams in the early 19th century seems to have occurred first in New England, where clams accounted for a large portion of protein in the diets of coastal Native Americans.

So, New England created clam chowder. Making a clam soup with tomatoes goes against everything right and natural. Don't do it, people. It's bad mojo.

In fact, there are rules that must be followed. Cardinal rules. Rules that must not be broken, lest you perpetuate the lie that a decent clam chowder resembles that wallpaper paste-ish, rubbery clam junk dished out to tourists who don't know any better.

Real Clam Chowder Rule #1. Do not thicken. You're making soup, not gravy.

Real Clam Chowder Rule #2. Use the clam juice to cook the potatoes and flavor the broth, but don't add the clams until the soup is done and you're ready to serve. Cooking the clams makes them tough as shoe leather. This is assuming, of course, that you're making the easy peasy canned clam version - if you're using live clams, the cooking rules are completely different. Use the Google machine.

Real Clam Chowder Rule #4. A salty bit of pork is essential. Ideally, you should use salt pork, but bacon will do. A sprinkle of minced salt pork fried into tiny golden brown cracklings or crispy chopped bacon bits over the top adds clam cred and screams AUTHENTIC!

Real Clam Chowder Rule #5. Thickening is not needed. The potatoes should be simmered until they practically fall apart on your tongue. Giving the chowder a brief, brisk stir after removing it from the heat and adding the clams will thicken it perfectly.

If there is a single tenet to making real Clam Chowder, then it is indeed a conviction: the chowder must never be thickened. Save the flour to make a batch of cheesy biscuits and add to the flavor party.